Sigmund (シグムント, Shigumunto?) is a character of the Unbreakable Machine-Doll series. He is a Banned Doll; the automaton of Charlotte Belew.

Sigmund (シグムント, Shigumunto?) was derived from the Germanic words, sigu, meaning "victory", and mund, meaning "protector". It is the name of Sigmund, a hero in the Völsunga saga and the king of Netherlands in the Nibelungenlied, of the Norse mythology.

Sigmund is a dragon that has a head that resembles a cross between a lizard and a crocodile but with a more noble and refined expression on his face and a body that is covered with hexagonal shape steel coloured scales. He has two horns on his forehead, has yellow eyes, and has four wings across his back that resembles a butterfly's. In Sigmund's usual small form, his size is no bigger than a cat and his body's structure resembles it. His eyes are rounder, his horns, in the anime, are shorter, his upper wings, in the anime and in the light novel, pointed upwards, and his lower wings, folded downwards. Whenever Sigmund transforms into his huge original form, he becomes roughly three metres high and eight metres long. His steel coloured scales shine with a velvety gloss and his face becomes more angular, with a longer chin, and his body more muscular, with spikes lining below his chin and on his spine. Sigmund's horns become darker in colour and more prominent, his eyes sharper, and across his back, his wings become bigger and manlier, with its wing claws becoming darker in colour, hanging majestically.

Sigmund is a calm and composed mature dragon. He is an acute observer who is always keen about his surroundings.

Sigmund having his usual banter with Charlotte.

During a lunch break, on Main Street, the crowd of students opened a path for Charlotte, with Sigmund resting on top of her cap, as she approached. Sigmund was having his usual banter with Charlotte when he suddenly noticed and pointed out ahead on Raishin and Yaya who were standing amidst of the opened path awaiting Charlotte. As Charlotte arrived, Raishin taunted her into a fight, and Charlotte and Raishin then had a teasing exchange. Charlotte became irritated with Raishin and instructed Sigmund of crushing him. At that instant, Sigmund transformed into his huge original form. Raishin and Yaya suddenly sensed an approaching iron ball and evaded it. The iron ball charged towards Sigmund who swat the ball away.

Sigmund being attacked successively by the Ten Benchwarmers' automata.

Armoured Knight, Barefooted Girl, Sextupedal Beast, Undine, Jack Frost, and Harpy attacked Sigmund successively, cornering him, and then Golem finally immobilizing him. The iron ball next charged at him, but Yaya caught it before it hit him. Ten Benchwarmers' Leader stepped out amidst the crowd of students and offered Raishin a proposal, but Raishin swiftly refused and then commanded Yaya to attack. Yaya kicked Golem away, enabling Sigmund to move freely again. Raishin then explained his plan to Charlotte when Witch suddenly fired Fireball at him, but Yaya had covered him, both appearing completely unharmed. Raishin commanded Yaya and she then burst forward and kicked Witch’s jaw. Ten Benchwarmer Leader, becoming desperate, commanded his group to attack Raishin instead.

Armoured Knight and Golem attacked Raishin, but Raishin dodged their attacks. Yaya kicked Golem, causing it to crash into Armoured Knight, and then dashed into the enemy's midst. Raishin followed closely after her, and together with her, distracted the Ten Benchwarmers. As Raishin drew the Ten Benchwarmers' attention to him, Charlotte waited for their automata to line up in a row and then commanded Sigmund, and Sigmund then launched Lustre Cannon. The automata were caught up in the blast. The Ten Benchwarmers, defeated, retrieved their automata and scurried away. Charlotte was then about to continue her fight with Raishin, but Raishin declined her then threw a smoke bomb and ran off, along with Yaya, a considerable distance away from her. Charlotte let Raishin and Yaya escape and then had her usual banter with Sigmund as she set out for the Cafeteria.

The next day, during a lunch break, inside the Cafeteria, Charlotte, with Sigmund resting on top of her cap, was in line, two students behind a troubled Raishin, as she interjected and handed him some money. Raishin accepted and paid for his and Yaya's portions. Charlotte followed suit after and then threw on Raishin a notebook with a scribble in it that says that he had to pay with interest the money she had lent him. As Raishin signed the deal, he asked Sigmund how he was doing, and Sigmund replied that he was fine. Raishin returned the notebook back to Charlotte and then invited her to dine together. Charlotte refused, but Raishin was persistent and followed her to her table. Raishin then started talking to Charlotte as Yaya went into a dark silence and Sigmund nonchalantly began eating. Suddenly, Charlotte noticed that something had caught Raishin's attention; Magnus.

Charlotte and Sigmund watch Raishin's confrontation with Magnus in the anime.

Magnus was crossing the street along with his two automata. Raishin burst out of the Cafeteria, called out to Magnus, and then announced to him that he had something to give him. In a split second, Raishin was then surrounded by Magnus' Squadron. He clarified to Magnus that he only wanted to give him a gift, and Magnus then commanded his Squadron to withdraw. Hotaru took the small bottle from Raishin and gave it to Magnus who thanked him and left along with his Squadron. After Magnus left, Felix suddenly applauded Raishin and then greeted him. He asked him if he could talk with him for a moment, and Raishin complied. Felix and Raishin headed into the Cafeteria to Charlotte's table. Felix then requested Raishin to work with him, but Raishin swiftly refused. Felix was insistent, offering Raishin an Entry as a deal.

Sigmund and Charlotte look on at the scene.

Evening, at the grove of trees behind the Techinical Vocational Building, Charlotte, with Sigmund resting on top of her cap, was onlooking the scene when Raishin, Yaya, Felix, and Lisette arrived. Felix, along with Lisette, entered the grove of trees, and after, called out to Raishin who, along with Yaya, then entered it as well. Charlotte then went nearer to the scene and was shocked to see Morning Star Wielder's dead body. Raishin gave his observations about it, which Felix confirmed, and then inquired about its identity, and Lisette answered that it might probably be Morning Star Wielder. He was about to consult Charlotte, but Charlotte turned away. Raishin tried stopping her, but Charlotte forced controlled Sigmund to bite Raishin and then left. One hour later, Sigmund came to the Tortoise Dormitory, landed on Raishin's room’s window's windowsill, and knocked on its glass. Raishin welcomed Sigmund, and Sigmund apologised for biting him earlier, vindicated Charlotte, excused himself, and then finally left.

The next day, Charlotte, with Sigmund resting on top of her cap, came to the Tortoise Dormitory and visited Raishin's room, surprising Yaya. She then asked Raishin on a date, shocking Yaya. Raishin assented, and Charlotte then hurriedly left. Half past three in the afternoon, in a lecture room inside the Faculty of Science, Charlotte, with Sigmund resting on top of her cap, led Raishin, along with Yaya, out of the lecture room to the Techinical Vocational Building where they then searched behind it. Two hours later, dusk, she asked Raishin to be a decoy for Cannibal Candy, but Raishin refused. He then asked Charlotte for them to have a proper date, shocking her and Yaya. Charlotte declined, but Raishin taunted Charlotte, making her assent. Charlotte and Raishin then left the Academy. Yaya then tried following after them, but Sigmund stopped Yaya. He then reminded her and warned her, making her begin to weep. Sigmund tried consoling Yaya and gave her some advice. He then landed on top of her head and advised her to be cautious of Cannibal Candy.

Sigmund about to launch Lustre Flare at Quadrupedal Automaton.

Night, in a dark Tree Tunnel, Charlotte, together with Sigmund, then searched for Cannibal Candy. Sigmund scanned the surrounding area when he noticed Quadrupedal Automaton fifty metres away. Charlotte then commanded Sigmund to launch Lustre Flare at Quadrupedal Automaton, impaling it, and then ran over to it when the Disciplinary Committee members suddenly ordered her not to move. Felix accosted Charlotte and then remarked that since he heard that she had snuck out of Gryphon Dormitory, he then ordered the Disciplinary Committee to cordon off the area they were present in the case that she might do something, making Charlotte realise that she was being suspected of being Cannibal Candy. Charlotte vindicated herself and asked for evidence, and Felix answered that the evidence is the numerous magic circuits found in Charlotte’s room. Charlotte tried vindicating herself, stirring the Disciplinary Committee members as she knew of the numerous magic circuits in her room confirming them as evidence, and Felix then declared Charlotte as being Cannibal Candy.

Suddenly, an explosion's clatter coming from the Locker reached the area where Charlotte, Sigmund, Felix, and the Disciplinary Committee members were, stirring the Disciplinary Committee members. Felix appeased them and then ordered them to retreat as they will only be hindrances to him just as Eliza arrived, making them leave. After the Disciplinary Committee members left, Charlotte asked Felix if he truly believed that she was Cannibal Candy, and Felix assented, explaining that it would be problematic to him if he did not wherefore he planned Raishin to be one who will defeat Charlotte, although however since Raishin opened Lisette’s locker, he then had him and Yaya dealt with instead, making Charlotte realise that Felix was actually Cannibal Candy and was planning to use her as his scapegoat, making her despondent and weep. He then had Eliza launch Jet Water Spear at Charlotte’s head, but Sigmund used his body to intercept the attack, sending him crashing away to the ground. He then called out to Charlotte to support him, but Charlotte did not respond. Felix had Eliza launch Jet Water Spear again at Charlotte, but Raishin, together with Yaya, suddenly appeared and had her block the attack.

Gram (, Maken (Guramu)?, lit. "Cursed Sword"): A magic circuit of the heavenly scale being a secret formula closely related to how the universe works, violating the law of the universe, allows Sigmund to annihilate matter. The annihilation of matter involves the encounters between the anti-particles and the particles in the atmosphere leading to the annihilation of both, thus resulting to the production of light, causing a strong vacuum effect which then contains it. It allows Sigmund to shoot different types of beams of light which can annihilate matter or anything that has form, no matter how hard or how mirrored the object is. However, there are exceptions such are the Fragarach magic circuits of Shin and the Reflector Knights and the Force Dimension magic circuit. The amount of the effect of the beam of light limits only to the amount of output released by Sigmund. The annihilation of matter also allows him to generate matter which allows him, in combination with it, to manipulate his mass. The generation of matter involves the conversion of the resultant of the annihilation of matter; light, into matter. A significant amount of light is needed for its conversion into matter, and thus, the collection of light is the dense gas-like darkness, with the lightning it produces being discharged around it, that envelopes Sigmund whenever he increases his mass. The annihilation of matter is then used to decrease his mass, thus his emission of light. 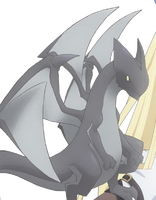 Sigmund's full appearance in the anime. 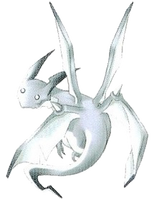 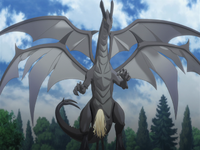 Sigmund in his original form in the anime.

Sigmund in his pool size form in the light novel. 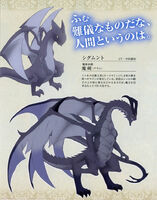 Retrieved from "https://unbreakable-machine-doll.fandom.com/wiki/Sigmund?oldid=30918"
Community content is available under CC-BY-SA unless otherwise noted.