Irori (いろり, Irori?) is a character of the Unbreakable Machine-Doll series. She is a Banned Doll; one of the Setsugetsuka series; the elder sister of Yaya and Komurasaki and represents the Snow (雪, Yuki?), and the automaton of Shouko Karyuusai.

Irori is a young dazzlingly beautiful girl who has some similar facial features as Shouko, Yaya and Komurasaki. She has a white complexion, a slender body, with an ample bosom, and an average height, being a little taller than Yaya. Irori has long straight silver hair extending to her hips, with fringe, strands extending to each side of below her eyes and strands extending to each side of her chest that are each inserted into a circular violet bead at its tips, has thin eyebrows, and has black eyes (with bluish undertones) that are dignified. She wears a kanzashi that is composed of a small circular gold ring, a big circular gold ring and a draped black cloth that are all strapped together by an indigo strap, with its asymmetric straps extending to her neck dangling, that has a circular violet bead at each of the tip of its straps to her hair at the left side part of her head, a light pink tint on her lips, a pair of wrist's length light blue middle finger hooked fingerless gloves on her hands that have indigo straps strapped around each of them by her wrists and tied into a ribbon at each of their centre back, with its asymmetric straps dangling, a beguiling long sleeved light blue kimono top, its colour representing the season she represents; winter, with its sodes held up and hanged by an indigo strap to her shoulders and tied into a ribbon at her left shoulder by her chest, with a strap extending to her bust and another strap extending to her waist dangling, that has an opening at its bottom part over a white lined blue dounuki that has white ruffle trimmings at its edges, a blue-green hanhaba obi wrapped around her waist over a pale blue obi-age and a violet obi-jime strapped around its obi and tied at her left into a ribbon, a black sash wrapped over her kimono by her waist that has arrow-like shape edges at its front and a vertical black cloth that has her blue, in the light novel, white, snowflake symbol at its centre attached to its edges by indigo straps that are tied into a knot, a pair of mini-crew length light blue tabi socks that have slight openings at their top part and indigo straps strapped around them by each of her ankles and tied into a knot at each of their centre, and a pair of indigo strapped black lacquered high platform geta. Irori's undergarments is composed of a purple bra that has a small purple flower at each of its apex, a small purple ribbon at its gore and a vertical lace at each of the centre of its cup and a purple underwear that has a small purple flower and a vertical lace at its centre strapped on each side of her hips and tied into ribbons.

Irori is one of the Setsugetsuka created by Shouko Karyuusai, and as one, she has the Karyuusai brand's Japanese kanji inscription, (花柳斎, Karyūsai?), carved into her back above her hipbone.

In the anime OVA 6, Irori wears a modern blue monokini.

Irori and Yaya looks on as Shouko relates the Japanese Army's investigation on Cannibal Candy.

Night, Shouko, together with Irori where with hidden presences, sneaked into the Academy to the Tortoise Dormitory, whereupon seeing Raishin at its lobby, greeted him, surprising him and making the Tortoise Dormitory's Boarding Master ask him if there was anything wrong. Raishin allayed him, and Shouko then whispered to Raishin for them to talk in his room. Raishin, Shouko and Irori headed to Raishin’s room, and after they entered it, Shouko greeted Yaya who assented, making Irori suddenly interject and reprimand Yaya. Raishin asked Shouko for the reason why she was in the Academy, and Shouko answered that the Japanese Army’s investigation on Cannibal Candy's case concluded that Cannibal Candy might be a formidable opponent and then warned Raishin to withdraw.

Irori asking Shouko of her concerns.

Raishin replied his resolution in helping Charlotte, and Shouko consented, summoned Yaya to remove her restriction and lectured Raishin of Kongouriki’s weakness. Raishin then called out to Yaya, and together with her, dashed out of his room. After Raishin and Yaya left, Irori remarked her impression of Raishin's character ever since, but Shouko reproved her. Irori then asked Shouko if Raishin was capable of defeating Tenzen, and Shouko answered that Raishin would be the one to ascertain it and then abruptly shifted to remarking that talking about revenge was absurd. Irori did not pry and wished for Raishin’s safety and success. 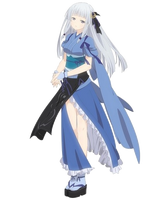 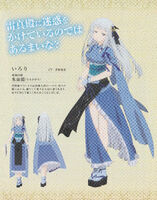 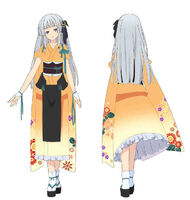 Retrieved from "https://unbreakable-machine-doll.fandom.com/wiki/Irori?oldid=29873"
Community content is available under CC-BY-SA unless otherwise noted.